When capturing live action, there are no second chances.

It’s not just about hiring a highly experienced, safety conscious pilot who can fly at speed across challenging terrain; it’s about hiring a pilot with a creative eye for motion picture,  who can simultaneously envisage, communicate and co-ordinate the audience experience, positioning the helicopter like a camera to achieve the best angles, making best use of natural lighting and landscapes as they happen.

And it’s not just about production days, our Aerial co-ordination expertise ensures shoot sequences are developed, approved and seamlessly executed in collaboration with camera crew, production crew, directors, other pilots and local authorities (CASA/CAA/FAA) before, during and after filming.

Chief Pilot, David Adamson’s long list of prestigious credits include aerial filming and stunts for Hollywood blockbusters such as Lion, live international motorsports events such as WRC, Dakar and Tour Down Under; award-winning documentaries such as Life on the Reef, Coast Australia and Terra, and; popular Television series such as SAS Australia, The Amazing Race and Air Rescue.

We fly (and provide flight tests for) almost every civil helicopter out there, enabling us to select the most suitable aircraft for the required task. 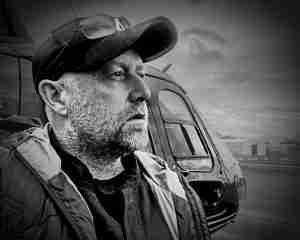 Founding Chief Pilot, David Adamson started flying helicopters in the UK in 1986, before emigrating to Australia in 1995.

His air-to-air and low-level aerial filming skills can be seen in many feature films, documentaries, live motorsport event coverage, TV commercials and  documentaries, both nationally and internationally.

David is also one of a handful of Flight Examiners who conducts Commercial, Private, Night, Instrument and Instructor flight tests, and aircraft specific type ratings and endorsements (such as low-level, sling, floats, winching, formation and check flights) on behalf of the Civil Aviation Safety Authority and a number of overseas authorities.

In recognition of his sharp focus on flight safety, David is regularly called upon to assist with accident investigations by the Australian Transport Safety Bureau, and also leads helicopter safety courses for pilots, aircrew, the general public and film & TV industry professionals.

With no accidents or incidents to his name, despite the highly technical and complex nature of his work, it’s no surprise that David has a reputation for exceptional safety standards.

APPROACH
FOR PILOTS
FOR INSTRUCTORS
FOR EMPLOYERS
APPROACH

The single biggest cause of helicopter accidents is skill-based pilot error: pilots correctly identify the undesirable aircraft state and decide upon the right course of action, but fail to successfully execute its recovery procedure.

Our mission is to significantly reduce this risk by providing highly realistic scenario based training (‘Error Management’)  in all operational situations.

Of course, the associated risk increases with realism, which is why all of our advanced training is conducted by our [over] 20,000-hour Chief Pilot and Flight Examiner, David Adamson who is also a helicopter safety advisor for ATSB.

All students are provided thorough briefing and debriefing, with intermittent knowledge checks, to ensure  skills are underpinned by solid understanding, not just procedural recall.

Our Error Management practices are supported by numerous academic studies which prove them to be significantly more successful in long-term error reduction than the procedural ‘Error Avoidance’ practices that are more commonly used in flight training.  See ‘Why Error Management Training?‘ for more info.

We provide thorough pre-employment flight reviews throughout Australia, consisting of an objective skills assessment (theory and flight) tailored to the role, and; a comprehensive written report of strengths, weaknesses, opportunities, risks and recommendations.